Yes it's a bandwagon and yes I'm jumping on it! I was really looking forward to watching the wedding with my best friend while we munched on sugary treats. As it turned out though, one of my teacher training courses was scheduled to start that day so I ended up watching parts of it via a live stream online while I sat in class.

I thought the whole thing was beautiful, Westminster Abbey looked wonderful, the greenery and plants inside and the way the red carpet accentuated the memorial to the unknown soldier, apt considering William's military career.

Catherine (Kate) looked absolutely stunning, very elegant and regal. I noticed that while William looked quite nervous when he first arrived at the Abbey, once the service began he was calm.

They looked  very happy together and in love and I wish them all the best of luck.
Posted by FalafelandChips at 3:54 PM No comments: Links to this post

Recently the Egyptian Red Sea resort of Sharm El-Sheikh has been in the news for all the wrong reasons. In 2010 there were a series of shark attacks that killed several people and since he was deposed in February 2011, former President Mubarak has taken up permanent residence in the city. Despite all this and the drop in visitor numbers since the Revolution, it is still a popular destination for tourists, especially those looking to combine sun, sea and sand and stunning natural beauty with an active nightlife. The waters of the Red Sea are ideal for snorkeling and scuba diving.

Sham el-nessiem is an Egyptian national holiday and is a uniquely Egyptian way to welcome spring. It translates literally into "smelling the breeze"  and dates back to Pharaonic times. These days it falls on (Coptic) Easter Monday and is celebrated by all Egyptians irrespective of religion. It is celebrated, as most festivals in Egypt are, with food; in this case, coloured boiled eggs, green onions and salted fish (ringa and fessekh). These are usually eaten as part of a picnic as most families head off somewhere green. I remember when my cousins and I were young, we would all head off to the family orange grove and the smell of orange blossom still brings those memories back.

This year a friend and I headed off to Sharm El-Sheikh for the long weekend and I have to say, it was one of the best ideas we'd had for a while! She was able to get us a good deal via her workplace so we were staying in a lovely 5 star resort at a fraction of the cost. The hotel was nice, the room large enough for the 2 of us not to constantly be in each other's hair and the view from the balcony was lovely
The other advantage this hotel had to the one I stayed at two years ago was that the beach was right within the resort. A three minute walk (through the pool area and garden) lead you to a walkway from which you had a glorious view of the red sea.
While I would have been perfectly happy to spend all 4 days on the beach, snorkeling, reading and soaking up the sun, my friend had other ideas. She insisted that she wanted to climb Mount Sinai and visit St. Catherine's monastery. I was slightly less than enthusiastic as I had done this on my last visit and it was exhausting, freezing and took up a whole day. However, remembering just how tiring it was I felt I couldn't leave her to do it alone so we booked 2 places on a trip leaving the night we arrived. Unfortunately, the trip was poorly organized and our guide was rude, badly spoken and aggressive, but enough of that story now! On the bus journey to the mountain the air-con was on full blast and that was just enough to bring the cold I'd been keeping at bay all week to full strength. By the time we started the hike, my nose was completely stuffed and breathing and hiking at the same time was becoming problematic (I've discovered I like breathing...it helps keep me alive), so in the end I only made it as far as the first rest-stop on foot and then carried on on a camel!
My camel pilot Saleh (a Bedouin native to Sinai) and I had a good chat as we made the trek up, he's been doing the job for about 3 years and that on a good day he can hire his camel about 4 times in either direction. The best tourists in his opinion are Indonesians as they nearly always opt for a camel ride up , while Russians are far less likely. I asked him how the revolution had affected business and he told me that they've definitely had fewer people this year but the numbers were starting to pick up again.
The view of the sunrise was as stunning as I remember and I'll let the pictures do the talking. 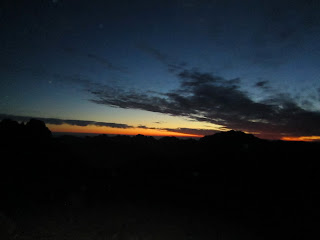 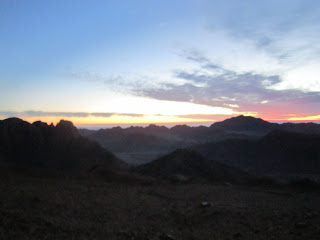 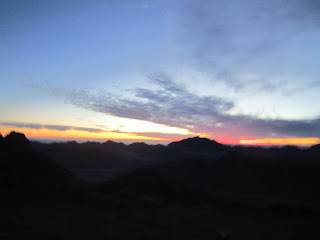 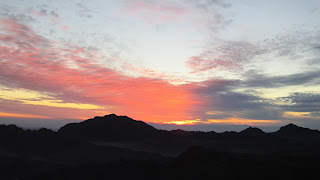 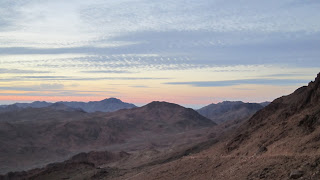 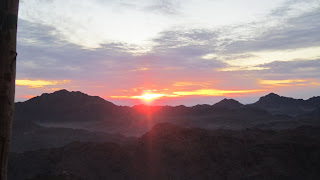 In the end we weren't able to go around the monastery as the monks had decided to close to visitors in preparation for Easter services, but we did manage to use the facilities there and I snapped a picture of the door to the main church decked out for the occasion. 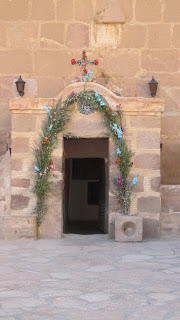 Back at the hotel I took some paracetamol and slept for 12 hours straight! Luckily I got my wish and was able to spend the next 2 days on the beach. 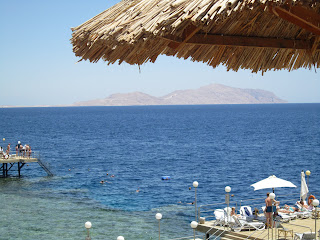 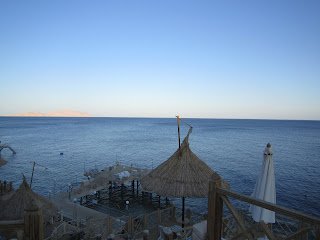 Posted by FalafelandChips at 10:57 PM 2 comments: Links to this post