Today was the first day of voting for Egypt's Lower House of Parliament (Magles El Shaab مجلس الشعب) or The People's Assembly. As with almost everything political in Egypt this year, it was new and different. For a start, there were new names to vote for! Gone were the names of those who had dominated the parliament (and country) for decades and they were replaced by countless others. With all these new faces came new symbols (due to the low literacy rate in Egypt, each candidate and party is given a symbol so that illiterate voters know who to choose). I remember the only signs I would see around my neighbourhood were the camel and the crescent, both used by the National Democratic *snort* Party candidates. This time there was a veritable cornucopia of candidates to choose from (130 on my ballot paper) and their symbols ranged from the bizarre to the ridiculous (cookers, food mixer, tank, knife, shirt, carpet, chair, bouquet of flowers, gold ingot, water heater, bus, school bus, tram, train, basketball, basketball net and so on).

Of course, this being Egypt, nothing is as simple as it first appears. Under former President Nasser an addition was made to the constitution stating that 50% of the Lower House should be composed of workers and farmers. A later amendment set the minimum % of women who must be MPs. This means that voting is not as straightforward as placing a check mark next to your preferred candidate's name.
Once in the polling station, you're given 2 papers; one to vote for the party and one for the individual candidates. Of the individual candidates you must choose 2, one of whom must be a worker. These individual candidates may be running as a member of a political party or as independents. Confused yet?

My day began at 8:30 when I left home to head towards my polling station (polling stations were assigned according to your national ID number and so my parents and I were each at different stations despite sharing an address). I had no idea where the school serving as my polling station was, but I was lucky enough to meet up with 3 young ladies from my neighbourhood who were at the same one, and despite none of us knowing where we were going, we set off together. We found our school in a middle/working class area of Cairo called El-Zaitoun which is fairly conservative, it also has a large Coptic population which meant the queue was a mix of people voting for the Freedom and Justice Party (the political wing of the Muslim Brotherhood), a minority voting for the ultra-conservative Islamist El-Nour party and Christians who, like me, were voting for the more liberal or secular candidates.

The queue was long, and seeing it was amazing as Egyptians are not famous for their patience or queue formation! It snaked around the block in a U shape and was twice as long when I left as it had been when I joined.

We were all chatting, but none of us ever really discussed who we were voting for, we were just pleased that we were voting. There were a few people passing out flyers as we waited, despite this being against election rules which state that all campaigning had to have ceased 48 hours before the vote.  The actual voting only took a couple of minutes, as I knew exactly who I was voting for. So after a 3 hour wait, weeks of reading up on parties I made my 3 check marks, signed the register, dipped my thumb in the fluorescent ink and was done! I had voted for the first time!! 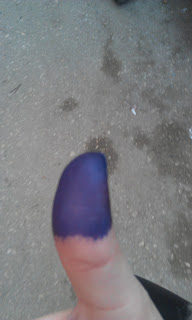 Of course, none of this was imaginable a year ago and if people had not taken to the streets and squares in January, we would have "voted" for a new President next September only to have Gamal Mubarak win with 90% majority. There are  many who think this parliament will be a useless entity, there purely for show until the constitution has been reviewed and a President elected next year. They also say it may not even last beyond a couple of months. Whatever happens, for better or worse, Egyptians went to bed today feeling, for the first time, that they made a difference. So for that alone, I say, to everyone who protested, was injured and especially to those who gave their lives; "Thank You"

Posted by FalafelandChips at 10:00 PM 2 comments: Links to this post