Egypt: The Revolution and Beyond

This page contains all my posts relating to the 2011 revolution in Egypt. 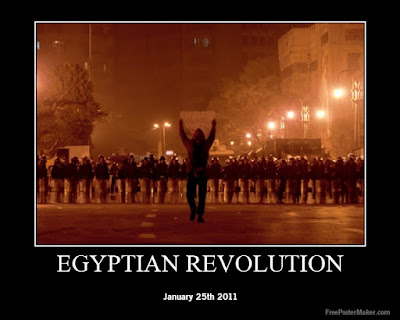 The protests began on Jan. 25th 2011 as a series of demonstrations in various cities around the country following a call to protest in a 'Day of Rage' launched on Facebook and spread on Twitter. What was written off by many as being no more than 'a few kids' out to cause trouble and disruption on a public holiday (ironically, Jan, 25th is Police Day in Egypt), turned out to be the spark that lit the flames of revolution.

The violent reactions of the security forces that day and on Friday the 28th were enough to make a people who had become politically apathetic and despondent rise up and demand their rights and the removal of the regime that had, for so long, ruled unchallenged.

For 18 days, the revolutionaries chanted, cheered and marched. Tahrir Square in central Cairo became a safe haven and a beacon of hope. Around the country Egyptians were making their voices heard in a way unseen since 1919. Like 1919, Christians and Muslims were side by side and protecting each other during prayers. The sectarian rifts that have been building over the past 10-15 years disappeared.

Most of the images of the revolution came from Tahrir Square and the atmosphere there represented everything that is good about Egyptians and Egyptian society. In amongst the political chants there was music, dancing, praying, food, drink, poetry, art and humour, always plenty of humour. There were lost and found stations, people handing out food, drink, blankets and field hospitals were manned by volunteers and stocked up via donations. Rubbish was collected and there was even separate organic and non-organic bins. There was NO sexual harassment (this only started in the celebrations following Mubarak's resignation).


They went with songs to the battle, they were young.

Straight of limb, true of eyes, steady and aglow.

They were staunch to the end against odds uncounted,

They fell with their faces to the foe.

They shall grow not old, as we that are left grow old:

Age shall not weary them, nor the years condemn.

At the going down of the sun and in the morning,

We will remember them.

Laurence Binyon, For the Fallen


"Went the day well?
We died and never knew
But, for good or ill,
Freedom - we died for you.
"When you go home,
Tell them of us and say
'For your Tomorrow
These gave their Today'
(Simonides, 5th century BCE - on the 300 Spartans who died at Thermopylae)

Links To My Posts

My Evening in Tahrir Square