Today Egyptians took to the polls to vote in  the referendum on the proposed amendments to the constitution (for more details please see my post HERE).

I'm 26 years old and I voted for the first time today. Even though I've been eligible to vote in Egypt since I was 18 there never seemed to be any point before, the results were a forgone conclusion; Mubarak's National 'Democratic' Party would win. In some cases even dead people would manage to vote!

My brother and I were at our local polling station by 8:20 and there was already a queue winding its way from the office on the second floor to the street outside. By the time I left at 9, the queue had spread further down the street and I couldn't actually see the end of it when I came out, and that's just one of the polling stations in my area! Egyptians willingly and quietly lining up with no pushing or shoving is in itself is an amazing sight to behold!

The atmosphere was great, very positive and everyone was eager to ensure their voice will be heard, anyone who started to try and convince people to vote one way or another were told to keep their opinions to themselves and just vote when it was their turn. I had a woman behind me in the queue, whom I can only describe as a traditional Egyptian Mama, who was welcoming everyone who joined the line and told me she'd spent last night going around her neighbourhood reminding everyone that it was their right to vote and brought some of them with her today. She was talking about all the changes she's hoping to see in Egypt including an all-female police force to deal with sexual harassment. She got a big cheer for that one!

In the end, I went into the polling room handed in my National I.D, took my ballot paper behind the screen, popped it in the box and dipped my finger in the fluorescent ink to prove I'd voted.


WHAT A FEELING!!
To think that a mere 2 months ago, all this would have been impossible. In 3 months Egyptians have toppled a corrupt government and taken the first steps to re-build the country democratically. That's amazing.
If you live in a democratic country, don't ever take your right to free and fair elections for granted. We had to fight and many died for us to get this far today.
VOTE! 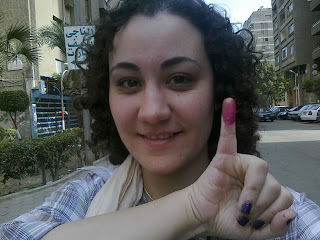 Posted by FalafelandChips at 2:23 PM 6 comments: Links to this post

Over the last few weeks stories have been spreading through Egypt at the speed it takes to press 'send' on a mobile phone. These stories always start the same way; "Confirmed news" or "True story" and end with "plz spread" and the like.

All this coupled with people's reactions to television news (I'm thinking specifically of state-run television here) has made me wonder why Egyptians are so ready to believe what they're told without question. In my opinion, the blame lies with the education system. The Egyptian national education system is very old-fashioned in one vital aspect; it relies on rote learning and not the understanding of concepts to achieve high grades. Year after year, regardless of the subject, students cram the facts into their heads then extract it all in the exam and wipe the slate clean for the following year. This continues all the way up through to university. The only time it doesn't happen is when children go to international schools which follow a foreign system or one of the private universities where grades can also depend on research papers.

My point is, if for the major formative years of one's life the only way to succeed is to blindly and deafly repeat what a higher authority(teachers, lectures, textbooks) has said then surely this will have an effect on one's ability to think critically? If that authority is thought to have all the answers, surely one learns not to question that authority for fear of failure? And when the authority behind that comes out with statements about the state of the country one has become so conditioned that once again, no one questions it.

Yes, things are dangerous here in Egypt, but my question is this; is it more dangerous or a different kind of danger? I'm not saying that all these people are lying, or that the people behind these messages are not well-intentioned. Nor am I claiming that all is calm on the streets. However, what I am saying is that there is, in my opinion, a great risk of panic spreading among people. Everyone who reads these messages believes them and sends them on to their contact list. But no one seems to bother to find out where the story originated from. The cousin or friend in the message could be anyone. Please, if you get one of these, call the person who sent it and ask if they wrote it. If they didn't and are just forwarding it, please try to verify the story before sending it on.

Mad-Eye Moody from the Harry Potter is always urging "Constant Vigilance", this is certainly the line we should be taking, just make sure vigilance doesn't turn to paranoia.
Posted by FalafelandChips at 2:56 PM No comments: Links to this post

Well we didn't actually drink tea, but we most certainly spoke politics. A few nights ago my brother, a friend and I went to a friend's house to meet with a judge and former UN lawyer to talk politics and the discuss the future of Egypt.

Conversation ranged from the structure of the country's justice system and the challenges facing those in it and the possible scenarios in Egypt's future. The major focus of the evening though, was the proposed amendments to the constitution. These amendments address several main areas:

Something that I hadn't realized before this meeting was that the old constitution is technically null and void since when Mubarak stepped down and handed control to the Supreme Council of the Armed Forces the constitution fell with him, because he left office due to a revolution. Legally our current constitution is what was issued by the SCAF in their communique which stated their intent to uphold the laws of the land and all international agreements and treaties ( a thinly veiled assurance to Israel regarding the Camp David peace agreement). This means that instead of simply amending the constitution, now is the best possible time to re-draft the entire document. The only possibility of this happening is if the proposed amendments are refused in the referendum to be held on March 19th.

One article that was not mentioned in the list of proposed amendments is the second article. This states that the official language of Egypt is Arabic, the official religion is Islam and that Islamic sharia is the only source of jurisprudence.  This is the section that a growing number of people have objections too. Egypt has approximately 10 million Coptic Christians and it is felt by them, and many Muslims, that this last section of the second article is unfair to this section of the population.

What 'our' judge was able to tell us, is that in his professional experience this is only applied in family law and only to Muslims. Our host family was Coptic Christian and to hear the situation discussed rationally, calmly and intellectually from both points of view was refreshing, too often these conversations turn hostile. One of the points raised was that of religious education in school. One argued that from a very young age she felt "different" from her friends when the class was separated for religion classes. Her argument was that if this were removed from the curriculum (leaving religious education to the home and family) it may well go some way to removing the 'us and them' mentality which in cases may be subconscious.

All in all it was one of the most interesting, stimulating and thought-provoking evenings I've had in a long time. I really hope we get a chance to repeat it.
Posted by FalafelandChips at 11:24 PM No comments: Links to this post

The joys of being single.

When I say I'm enjoying being single I get looks which range from pitying to disbelieving.

It's true though and I'm not saying it to be different or to play hard-to-get. I like being able to be selfish sometimes, I enjoy being able to treat myself to something and not have to explain to someone why I didn't ask them to get it for me. I love being able to decide to go out with friends and not have to tell someone or worry about them feeling abandoned and unloved.


I also feel I've grown so much more as a person these past two years I don't feel ready to give up on the woman I am becoming just to pander to other people's  expectations!

I believe in love, companionship, marriage and all that jazz but I also believe that it happens when a person is ready and that there's really no set time frame to determine when that may be. There's a great line from Buffy the Vampire Slayer (BTW I'm pretty sure this show has a quote for any occasion) where Buffy likens herself to cookie dough ": I'm cookie dough. I'm not done baking. I'm not finished becoming who ever the hell it is I'm gonna turn out to be. I make it through this, and the next thing, and the next thing, and maybe one day, I turn around and realize I'm ready. I'm cookies. And then, you know, if I want someone to eat m- or enjoy warm, delicious, cookie me, then that's fine. That'll be then. When I'm done. "


Once I am as fully formed as I can be as an individual(or a cookie) I'll meet someone is also fully  formed and we will compliment NOT complete each other.

On the other hand if Richard Armitage or Gerard Butler were to propose to me tomorrow I would be planning a wedding ASAP :)
Posted by FalafelandChips at 10:03 PM 3 comments: Links to this post

Anticipation, Excitement and a Healthy Dose of Fear

Over the past 4 years in various classrooms I've been lucky enough to see several experienced and talented teachers at work. I've been in very different classroom environments and seen a variety of discipline systems and organizational techniques. As these classes have been across a range of age levels I have gained an idea of what children are capable of and how they behave.

Next year I will be in charge of my own class for the first time after finishing my teaching degree. While I'm thrilled to bits and very excited to be working with my favourite age group I'm also whisper it...terrified. What's brought this on you wonder? Well it's probably down to the fact that one of my colleagues has been out for the past few days and I've taken her class. The kids have been, to put it politely, not very well behaved. I walked out of the class at the end of my lessons today convinced that I will be a failure as a teacher next year. That my plans and ideas will be good but the execution poor because I will not be able to control the students.

So here's hoping it's all in my head and that next year I will have a class of -fairly- well behaved students who will learn, follow rules, get work done and have fun!
Posted by FalafelandChips at 9:56 PM 3 comments: Links to this post