And another year's over and done with.

Academic year that is. The end of the 2010-2011 academic year also marks the end of my career as a co-teacher, as of September I am a class (homeroom) teacher.  As I've said in a previous post, I'm in turns terrified and excited about the new direction in my career. I've spent the last 4 years working with different teachers, age groups, I've been a subject teacher and a substitute and I've finished my teaching degree and all but completed my Masters in education. It's time to move on to the next step and even though it may be considered premature, I'm already thinking of looking at schools abroad in a few years time.

Right now though, my focus is on next year (actually 2 months away!) and how I can survive my first year as a teacher, luckily I have a great team of teachers around me whom I know I can rely on when I need help, ideas or a shoulder to cry on.

This is what the class I have claimed for next year looks like at the moment (I've already got some stuff in the cupboard), I'm already planning how I want the furniture arranged and how to use the bulletins. I think the teacher's desk will be the first thing to move! And I want to make it as bright and airy as possible!

And just as a reminder as to what exactly I'll be doing next year, watch this.


Posted by FalafelandChips at 10:41 AM 2 comments: Links to this post

Total Eclipse of The Moon

On Wednesday night Egypt experienced the first total lunar eclipse of the 21st century. The full moon had been the night before and was brilliantly bright in the night sky. I would have loved to have gone on a trip out to the desert to have a view unaffected by Cairo lights and pollution. As it was, I am still taking a Master's course and actually had a class that night so the starlight eclipse viewing was out of the question unfortunately.

Luckily, our professor- one very cool lady btw- was as excited as we were about it so we went down to the field to have a look at around 8pm, but at the time nothing had happened yet.
After checking up on Twitter for more details, we realised that nothing was expected to happen till about 8:22 pm and since we have a presentation to prepare and a paper to research for and write up we all traipsed back upstairs. Class was let out early so that we could watch the eclipse begin.

The shadow started to appear over the bottom left of the moon and then spread out across the rest. 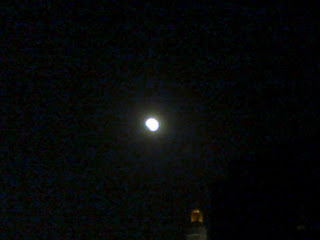 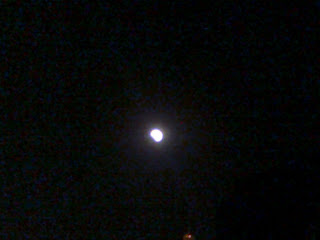 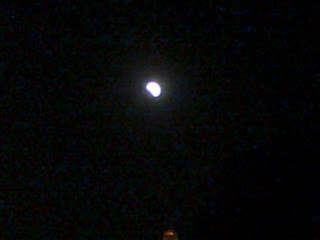 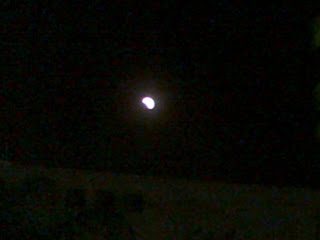 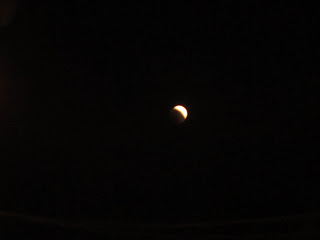 Posted by FalafelandChips at 9:35 AM No comments: Links to this post

Appreciating The People Around Us.

This morning my principle called me as I was writing the morning assignments on the board for my homeroom class and told me that the security staff were looking for me as there was a problem with my car. My car (named Veronica by my brother and fondly nicknamed The Lady V), was hit by a minibus driver as she was parked outside my workplace. He had been driving in the wrong direction down the road, lost control, slammed his back into a lamppost and then went forward into my passenger side.

The situation, although bad, could have been much much worse. For a start, if it had happened 15 minutes earlier we would have still been in the car and my mum-who was in the passenger seat-may have been injured. The damage to the car itself was also less severe than originally feared. We had thought that the axle may have been broken, or at least damaged by the look of the wheel. Luckily, that was not the case, it was something to do with the suspension that was bent (hey, I watch Top Gear for the stupid challenges not the car specs!). 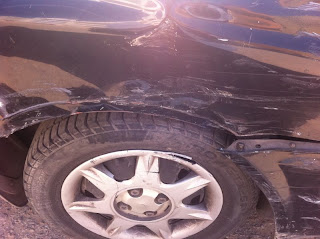 What a way to start the day! Now on top of the fact that I was staying at the school till 8:30 p.m for my Masters course, the fever that I've had for nearly a week and a full day of work (with kids who have advanced in leaps and bounds in terms of bullying) I had the added stress of worrying how I was going to get home!

The real heroes of the day were the school security personnel. As soon as the accident happened, they stopped the driver, contacted me, made him contact his boss to claim responsibility and confiscated his licenses. They got the school mechanic to take a preliminary look at the car and once the owner of the minibus arrived they made sure he left his car keys with them as security while he-and one of them- took V to a mechanic.

All ended well. At least I think it did, V got her ER surgery and I was able to -slooooooowly- drive her home. On the way home I was escorted by two male friends following along behind to ensure IrishAlexandrian and I wouldn't be alone if anything happened.

So a big, big Thank You to the security team at school and my knights in shining armor.
Posted by FalafelandChips at 10:17 PM 1 comment: Links to this post